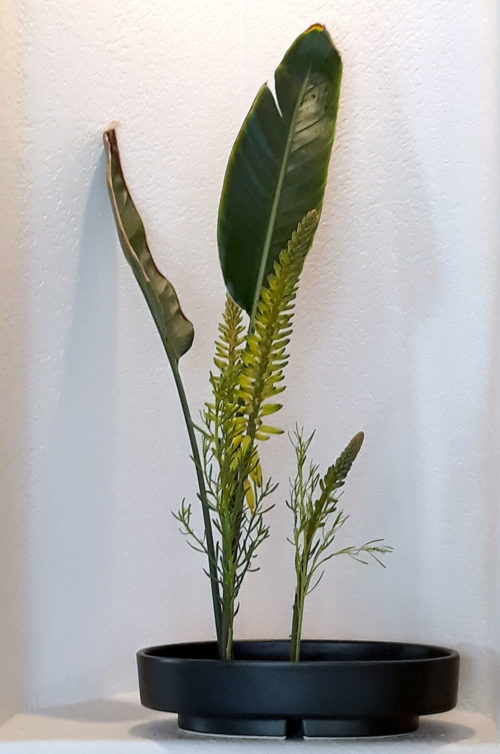 Our April workshop is a more “modern” shoka, the three-material shoka called sanshuike. With only a few exceptions, traditionally shoka works used only one or two materials, arrangements we know as isshuike and nishuike shokas. However, beginning in the 1960’s, arrangers began to create three-material or sanshuike shokas.

By way of a quick review….

Since this is still shoka, all the basic rules still apply. There are three main branches or elements called yakueda: shin, soe, and tai. These three maintain their relative sizes and relationships to one another. Shin is about 2-2.5 times the length plus height of the low container; soe is 2/3 the height of shin; tai is 1/3 the height of shin. There is still a clear mizugiwa which defines the part of the arrangement rising from the water. The mizugiwa should be thin, straight, respectful. The shady and sunny sides, in and yo, still matter. The placement of the three yakueda is still the same with soe behind shin and moving toward the rear and tai in front of shin and moving forward in a direction opposite from soe.  The traditional placement of tree material behind grassy material still holds, a reflection of the natural landscape.

To make this workshop even more interesting, we will be arranging a divided shoka sanshuike using two kenzans in a wide flat container, such as a suiban.  This divided form is thus a two group arrangement. The larger group is called  okabu; the smaller group is mekabu.

One possibility is that shin/soe make up one group in one kenzan and that the tai is separated in the second kenzan. In this case, a tai-za is used in the main shin/soe group to indicate the missing tai. The tai-za is a branch or other abbreviated element which provides the “suggestion” of tai, reaching out to the tai group. Think of this as saying to the viewer, we did not forget tai!

No stone or rock is used to separate the two groups. Plants can be either land or water plants.

It is also possible to separate soe from the other two yakueda. In that case, a soe-za is used to indicate the missing soe from the shin/tai group. The “main” group reaches out to the separated yakueda through the use of a “za,” which means “in the place of.” You may use a rock in front of soe to set it off as distant land.

A word on choosing materials….

A sanshuike work can be a “designed” work which emphasizes the colors and shapes of the materials or a more “naturalistic” arrangement which would express the season. It is most important to ensure the work is harmonious.  Choosing three random materials does not make a successful arrangement. Consider how the materials work together, how they enhance one another, how they provide contrast, how they contribute to one feeling or thought. The arranger decides based on the shussho or inner nature of the materials.

Given there are three materials in a sanshuike, the following combinations exist: 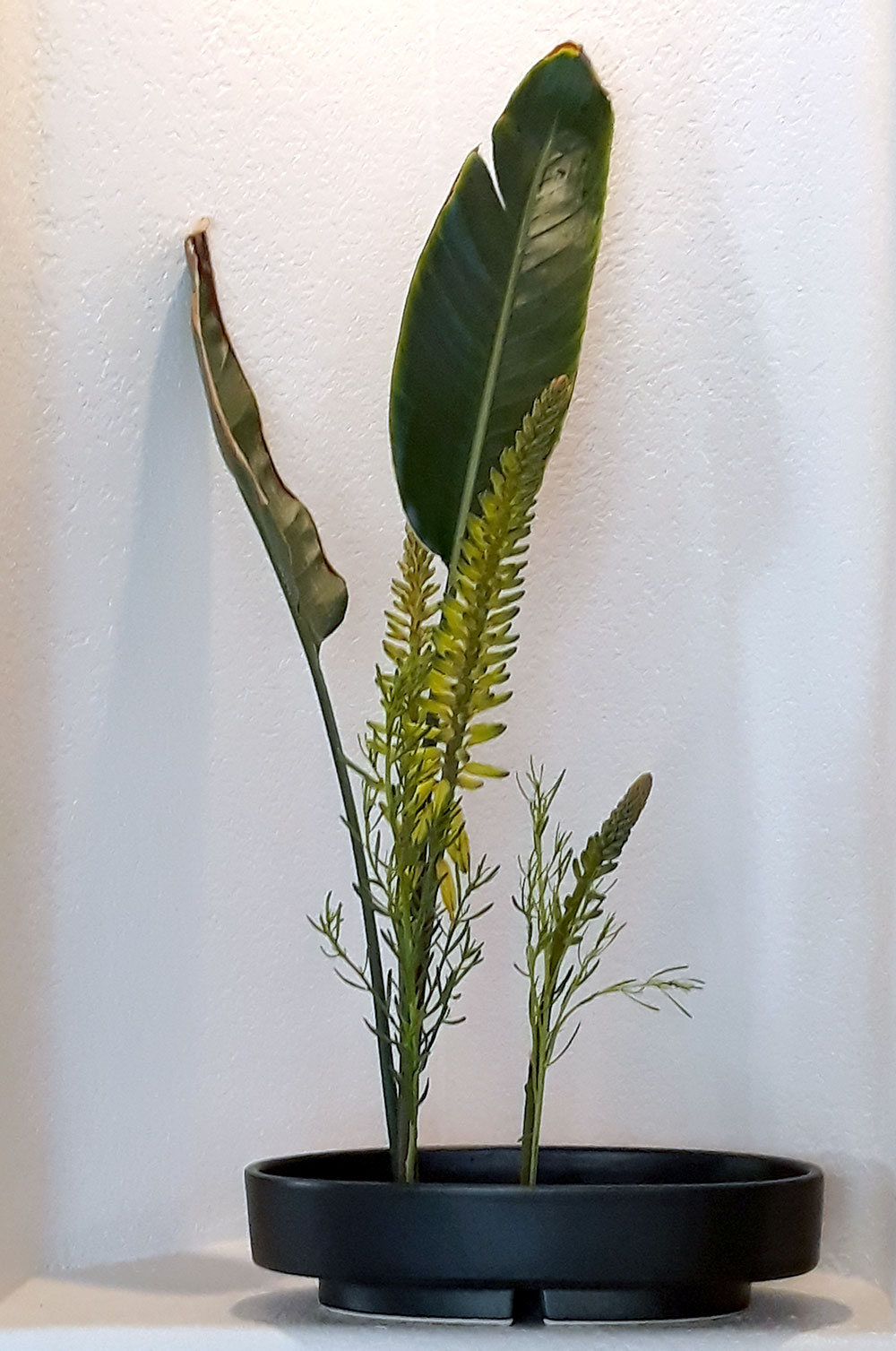 This is an example of the first possibility. Bird of Paradise leaves are shin and soe. They make up the larger group, or okabu. Aloe vera is both tai and shin ashirai. Desert broom is also an ashirai. A small piece of desert broom reaches out toward tai, as tai-za. 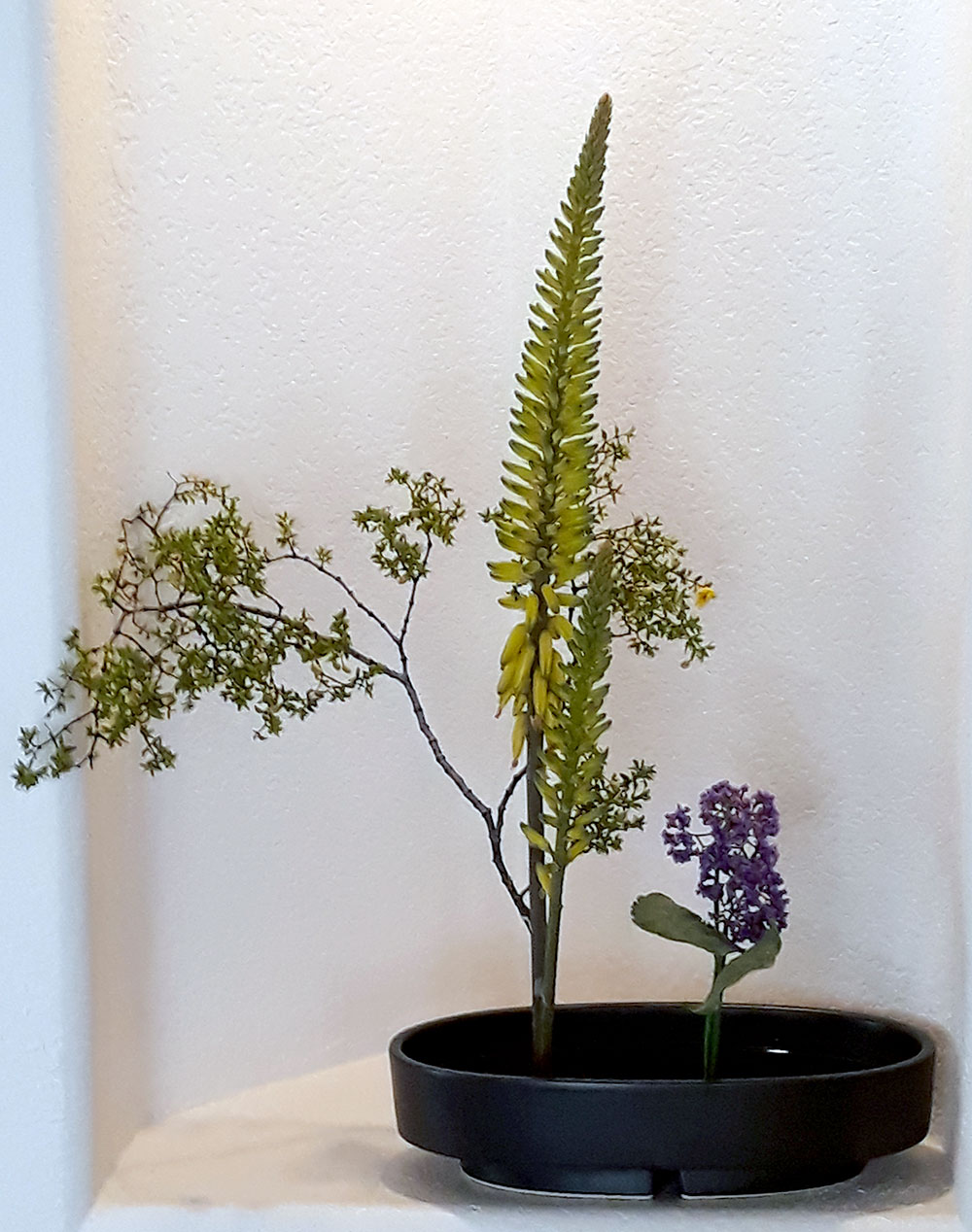 This is an example of the fifth possibility, with all three yakueda differing. Aloe vera is shin; creosote is soe and shin back ashirai on the shady side. Statice is tai. 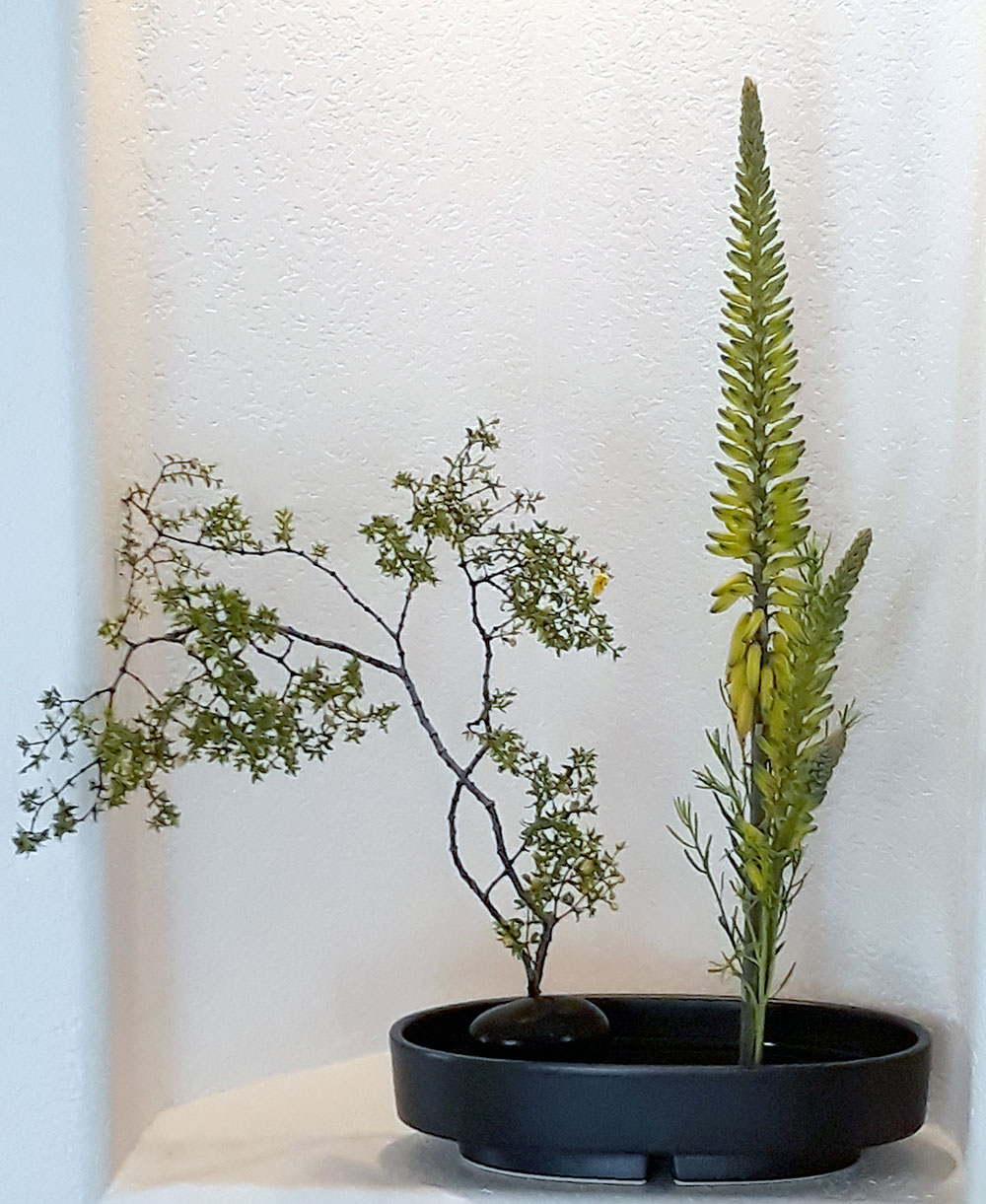 This is an example of the third possibility with shin/tai being the same material. It is also an arrangement separating soe from the other yakueda. Aloe vera is shin and tai. Soe is creosote. Desert broom serves as ashirai and soe-za reaching out to the separated soe.

Finally, please do consider making a divided shoka sanshuike arrangement. Send your photos and a description of your work to me.  I will respond to each of you, and you will receive credit for the workshop.  I look forward to seeing your shokas!