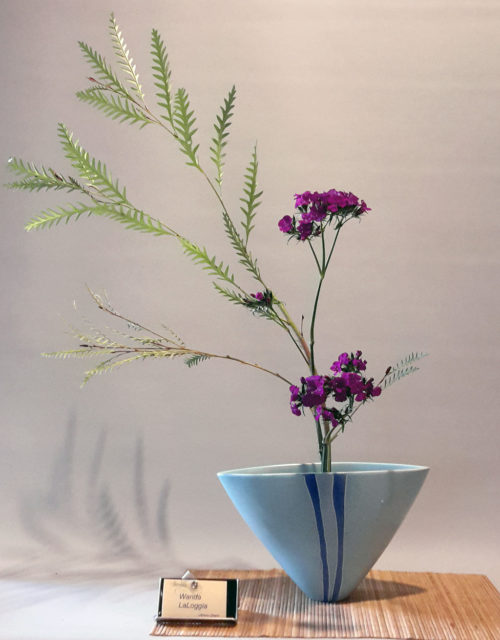 The maze-ike shoka workshop was led by visiting professor from Illinois, Jeanne Holy.  Jeanne has been studing ikebana for 25 years in the United States and Japan.  For this workshop, she led the class in a maze-ike shoka.

The maze-ike shoka is a mixed arrangement.  Jeanne created two isshuike arrangements and then combined them into a maze-ike.   She explained that there are many materials that when used alone are somewhat weak for isshuike.  By combining two weaker materials together the arrangement becomes much stronger.   In the maze-ike arrangement, both materials have a yakueda or shin, soe, and tai which are separate in the kenzan.   So, even though two materials are used, this arrangement is like creating two isshuike instead of a nishuike.   The arranger should choose a ‘dominate’ material.  Ashirai can be used to strengthen a weaker material so it appears stronger.   The ‘mixed’ part of the arrangement refers to the upper part of the arrangement.  Even though the material is separated in the kenzan, the materials ‘mix’ in the upper part.