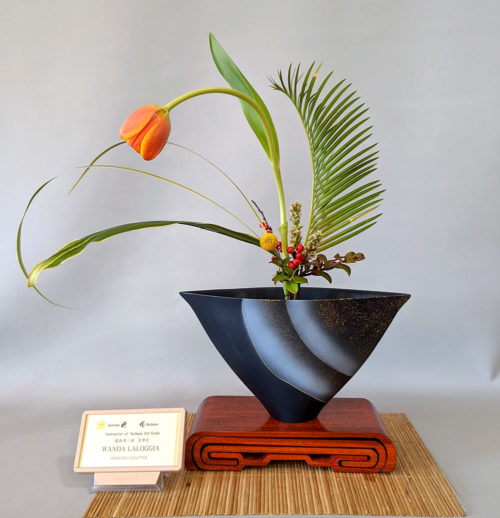 Another warm and sunny day in Phoenix, and another opportunity to study with sensei Holy. What a nice combination! She started by explaining that rikka shimputai has to feel like its precursors tatehana and rikka shofutai, but with a modern interpretation. Rather than shin, soe, tai, we are working with shu and yo with ashirai (something the arrangement needs to make it complete).

Unlike tatehana, rikka shimputai has rules, but fewer than rikka shofutai. Got that? We learned that we needed a mizugiwa, and a sho shin and a maeoki which made sense to those who had previously studied rikka shofutai. For newcomers, Jeanne showed by the example of her own arrangement just what these terms meant. She also gave us many tips on how to wire stems and leaves. Every attendee got personal assistance while working with her selected materials, and a formal critique of the completed arrangement. Thank once again, sensei Holy for a truly enlightening floral experience.