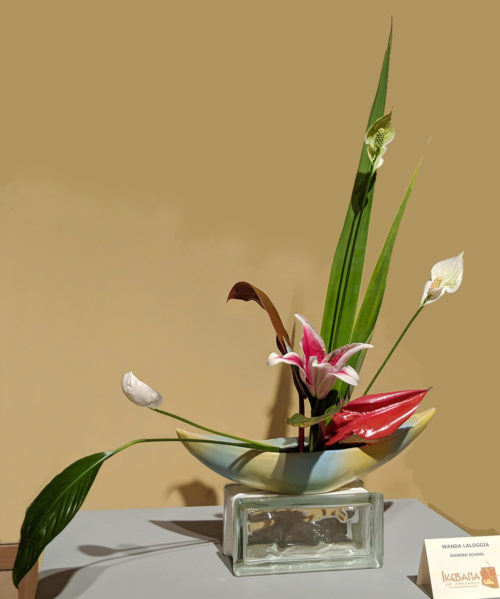 Linnéa Storm:  In the tokonoma is a traditional shoka using only one material, Shoka Shofutai Isshuike, here with flowering branches.  As in all shoka arrangements, the “feet” are in a line, and the arrangement is intended to be viewed only from the front, as here in the tokonoma.

Michele Nguyen:  Shoka Shimputai, a modern  shoka with a main element, shu, here a plum branch, and a supporting element called yo, here the Queen Anne’s lace.   The begonia serves as an ashirai, or helper.   It also focuses the arrangement at the mizugiwa, the water’s edge.

Yoly Hughson:  Shoka Shimputai, a modern shoka, whose main elements are called shu (the lily) and yo (the oncidium).   A flowering quince branch serves as ashirai, or helper.

Jeanne Sours:  Shoka Nishuike with Nejime, a classic arrangement using two materials:  calla lilies as shin and soe, the two main branches, and red alstroemeria as tai, here called nejime with the flowers in a V formation and functioning to “tighten” the area at the mizugiwa, the water’s edge.

Toby Schmich:  A traditional shoka using two materials, this Shoka Nishuike with Nejime is in a Japanese ceramic container.   Eucalyptus are shin and soe;  and purple pom-pom mums form the tai area, called nejime here as it serves to “tighten” the area of the arrangement at the mizugiwa, or water’s edge.

Linnéa Storm: In the gallery is Tatehana, or standing flowers, the oldest form of ikebana which would have been placed on the temple altar or in the tokonoma of a samurai’s residence.    From this style rikka would emerge with its many main components.   Materials include red twig dogwood, Queen Anne’s lace, bird of paradise leaf, solidago,  freesia, statice, Italian ruscus, cape honeysuckle.

David, Payne:   A classic Shoka Shofutai Isshuike, using one material,  knife-blade eucalyptus with yellow fluff ball flowers.  Because this material is flowering, it may be used alone to express its nature.

Minnette Siedenburg:  This modern rikka, rikka shimputai, uses sago palm.   The arrangement has two main elements called shu and yo complementing one another, responding to one another.  Other materials serve as ashirai, helpers, to complete the globular form of the work.

Wanda LaLoggia: Ikenobo School free style, Jiyuka, arrangement in a contemporary Japanese ceramic “boat-shaped” container with peace lily,  Stargazer lily, croton, and yucca.   Although a modern free style arrangement, this work reflects the ancient and classic boat shoka of the Ikenobo School with the materials outlining the shape of a sail and a small peace lily serving as an oar.

Bev Tall:   This double arrangement, Futakabuike, is a divided shoka which separates the shin and soe of quince in one kenzan,  from the tai of Dutch iris in the second kenzan.   Futakabuike thus represents a land and water scene.